Nigeria is far richer in other minerals than the petroleum endowment for which it is best known.

Nigeria has more than 34 solid minerals, including coal, bitumen and tars, gold, iron ore and barite in vast (and mostly untapped) deposits in over 450 locations nationwide that can be mined commercially. Nigeria’s solid minerals cover about 95% of the country’s 88,000 square kilometers, according to the Mines and Steel Development Ministry.

The mining sector used to be one of the mainstays of Nigeria’s economy before oil was discovered in 1956. Tin, lead, zinc and columbite were exported to earn foreign exchange pre-independence era in 1960 and earlier. Coal was mined to power electricity plants and used as fuel for locomotives as well as exported. Today, the sector contributes less than one percent to the nation’s GDP, according to the National Bureau of Statistics.

A number of reasons are responsible for the decline of the sector over the last three decades, which are mainly economic as well as political. The discovery of crude oil in the late 1950s also aided the neglect and gradual shift in focus from the mining sector.

In the last three years, there has been more focus and a deliberate policy shift from the government to revive the sector. The government of President Goodluck Jonathan is repositioning the mining sector and embarking on reforms that will create a conducive environment to encourage foreign direct investments.

“Our policy is to welcome all credible investors and we will continue to do all that we can to create the right conditions for them to thrive,” President Jonathan said in an emailed statement in December 2011.

The government considers mineral exploration and the development of the mines sector a high priority because of its potential to spur economic growth. Revitalizing the sector will help create jobs and also serve as an alternative source to generate revenue and boost foreign exchange earnings.

To achieve this end, the government embarked on a number of reforms to revive the mining the sector, chief among which is the total overhaul of the laws regulating the sector, establishing a mining and mineral regulations and setting up a dedicated mining cadastral office to oversee the award and regularization of mining titles.

At the heart of President Jonathan’s drive to revive the sector and attract private sector investment is a role reversal for the government from the conflicting position of “owner, operator and regulator’’ to that of a “regulator.’’ The government also is putting in place new investor-friendly mineral policy to encourage new entrants to the industry.

The new law is hinged on better transparency in granting licenses or leases, long-term security of tenure, competitive fiscal provisions for mining leases and ultimately, fostering a mines sector led by private sector participation and leadership. The Cadastre Office was set up as an autonomous agency saddled with the responsibility of handling all matters relating to mineral titles including granting and processing titles.

The office receives and disposes of applications for the transfer, renewal, modification, relinquishment of titles or extension of areas, as well as the maintaining a register of all titles. Investors will not invest if they cannot be assured of the security of assets they create, according to the Mines and Steel Development Minister. The Cadastral Office, which is located in the capital of Abuja and has regional offices, has jurisdiction over the entire country.

Already in place is relevant geological data on the distribution of mineral deposits across country. A high resolution airborne geophysical survey including magnetic, radiometric and electromagnetic surveys covering the entire the country and comprising more than 1.8 million line kilometers was completed in 2009.

The surveys aim to provide more reliable data and information required for necessary investment exploration in the country. The geophysical data allows for efficient, effective and a more accurate access to mineral data by investors, according to the ministry of mines and steel development. It is intended to speed up the mining industry investments with the proper publishing of geophysical data. Investors will be given access to these geophysical data electronically to fast track the development of the industry and encourage investors, the minister said.

Despite the country’s vast mineral deposits, the mines sector contributes less than a percent to the GDP. The mining sector has lost its place as the second largest source of revenue, foreign exchange earner and employer of labor after agriculture. The government plans to diversify the economy from crude oil, focusing more on the mining sector by providing incentives for private investors willing to inject capital into developing the sector.

“The government is seeking investors for mining at least 34 different types of minerals, including more than 600,000 ounces of gold, about 3 billion tons of coal, more than 2 trillion tons of barite and bitumen deposits of at least 27 billion barrels of oil equivalent,” Mines Minister Mohammed Sada told delegates last November at an investment conference in Abuja.

According to Sada, the government is setting up a mineral investment promotion unit in the ministry of mines and steel that will improve investment relations, particularly for new investors into the mines industry. The unit will help investors access investment information on minerals or metals more easily.

“The mining industry is currently going through reforms whereby government is making laws binding the sector and in the interest of investors,’’ Sada said. « We are in the process of setting up a unit in the ministry for mineral promotion and investment in order to make it easy and create an enabling environment whereby there will be one office to go and make enquiries about mineral investment.’’

Exploration opportunities abound in gold prospecting and mining, coal mining for power generation and export, barites for export and local industry use, tar sands and bitumen, lead, zinc, iron ore for steel mills and export, and limestone/calcite for cement and ceramic industries.

“Nigeria has enormous resources, and most of them are yet to be fully exploited in various sectors such as minerals, agriculture and human resources,” says Ehioma Goodwill, CEO of the Rhodium mining company. “The country is gradually embracing a politically stable environment, which is a plus for investors. Other factors include unrestricted movement of investment capital, a free market economy, a well-developed banking and financial sector, and the rapid development of physical and industrial infrastructure. There are also the attractive tax holidays, tariff concessions and export support known as Pioneer status.”

The government will provide tax incentives, particularly to foreign investors and new entrants, to boost investments in the mining industry. Government is also planning to improve infrastructures in order to attract investors. New investors will get a three-to-five year tax holiday, a reduction in capital tax to 10%, from 20% and companies profit tax to 30% from 35%.

Although the mining industry only just re-opened for business after the reforms, evidence of a successful reform process is starting to sprout as the government has begun attracting new investors, evidenced by the signing memorandums of understanding with new entrants.

In October 2011, the government launched the Australia – Nigeria Trade and Investment Council as part of efforts aimed at attracting foreign direct investment into the country, particularly into the mining industry.

To start with, the Nigerian program is aimed at attracting investments from the top ten Australian companies, including mining giant Rio Tinto. Plans are to launch similar councils with eight other countries.

In December 2011, the government also signed a $1 billion memorandum of understanding with the Bakrie Group of Indonesia to invest in the mining industry as well as other related industries.

“There are a lot of opportunities in the country,’’ Trade and Investment Minister Olusegun Aganga says. “The opportunities are here, the risk is here but the return on investment here is much higher than that of any other developing economy.”

The government in December also signed a similar memorandum of understanding with JRJ Technology and LLC USA, a consortium of American and Canadian investors and engineering and construction companies, to invest and mobilize credible investors into the mining industry.

The Trade and Investment Ministry is also on the verge of crystallizing a deal with an unnamed investor that will lead to an immediate investment of $100 million in the mining industry, and a further $4 billion in the short- to medium-term.

“Investment is coming in,” Aganga says. “I want more, that is the difference. I am not satisfied where we are, we can do far more with the opportunities here. We will do whatever we need to make sure we have the best and make Nigeria an investment designation in terms of improving our investment climate.” 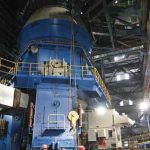