Chile’s fish farming industry began with private sector initiatives and despite occasional setbacks the industry is awash with opportunities for entrepreneurs to get involved in the industry’s future.

Chilean salmon fisheries are recovering from the outbreak of infectious salmon anemia (ISA) in 2007 which severly damaged one of the country’s leading exports . Salmon production fell dramatically as a result of ISA and is not expected to recover fully until 2013.

“We see a gradual recovery in the industry, but the important thing is that growth is with environmental, health, sustainability and social support,” says Carlos Odebret General Manager of SalmonChile. “These are the lines of the new programmatic agenda of SalmonChile for the next three years.”

Salmon accounts for 93% of Chile’s fish farming industry. The industry includes 140 producers and more than 1,000 suppliers of associated good and services. Prior to the ISA outbreak Chile was the second largest producer of salmon and trout in the world after Norway. The main markets for salmon are Japan, the U.S. and Brazil.

Until 2007 Chile experienced 15 years of growth in the salmon farming industry. By 2006 it accounted for 38% of the world’s salmon production and Norway produced 39%. In 2006 salmon was Chile’s third largest export product in terms value, just behind copper and molybdenum.

Because of the low per capita consumption of fish in Chile, it is produced primarily for export. Chilean aquaculture products for export include rainbow trout, Atlantic and Pacific salmon, turbots and molluscs, Northern scallops, Pacific oysters, mussels, red abalone and Chilean oysters. Chile is the world’s second largest producer of scallops and fourth largest producer of mussels.

Commercial fisheries exports were led by jack mackerel, southern hake, and Chilean sea bass. Chile also produces considerable amounts of fish oil and fish meal for use in the animal feed and other industries. Algae and algae byproducts for industrial use are another important export.

Chile is a natural fishing and fish-farming country. The Chilean Sea is considered among the most productive marine ecosystems in the world with clear, clean and cold waters.

“Just as Chile is blessed with natural attributes for grapes, so it goes for fish farming,” explains Cesar Barros, President of SalmonChile. “The 5°-20°C range of our waters suits fish growth. We also have a great network of fjords, islands and canals so fish can breed easily. Lastly, the distance between sweet and salt water is very short so transport costs are low.”

The private sector has been the main impetus behind Chilean fish farming from the beginning. In 1974 the first private initiative to raise trout for commercial purposes began. In 1976, Coho salmon eggs were imported and in 1977 the fry were released into Chilean lakes. The next year, the state created Sernapesca and over the next two years a series of private initiatives created companies dedicated to salmon farming. By 1985, the year SalmonChile was created, there were 36 fish farms and production reached 1,200 tons.

Chile currently has 174 aquaculture farms dotted along its 6,500 kilometres of coastline, down from a tally of 344 farms in 2008. On average each farm produces over 500,000 fish in a two-year growing cycle.

Several factors have been decisive in the expansion of fish farming such as technological development, business entrepreneurship and foreign investment. Between 1989 and 2004, foreign investment reached $300 million. Technology transfer has allowed Chile to increase the average farm size. Fishing and aquaculture, particularly salmon, are supported by public and private research, development and innovation pmrograms. The main investment opportuntities are in fish farming due to the forecasted increase in global demand for farmed fish.

Chileans have always relied on fishing for food and jobs. Today fishing is still a big business in Chile but that industry is under threat. The total commercial fishing catch in 2010 was 3.3 million tons, compared to 7 million tons in 1996.

In 2000, the government introduced Individual Transferable Quotas (ITQs) to stop the decline. Under ITQ, a total catch permitted is given to fishing companies each year based on historic catches.

The law has met with some success. Although total catches remain low, a guaranteed quota means companies can focus more on quality and produce more high-value products, such as canned and frozen fish for human consumption, and less fishmeal, used as feed by salmon farming companies.

This has helped create jobs and increase exports, which have risen from $1 billion in 1996 to $1.5 billion in 2010. About two thirds of the catch is now canned or frozen fish.

The ITQ system will expire in 2012 and the government is expected to propose a new law to regulate the industry for the next 25 years. One option being considered is to modify the ITQ system by putting part of the individual quotas up for auction.

This has raised protests from opponents who say that, among other things, it has been tried and failed in other countries. Proponents argue that the current system limits the entry of new players into an industry dominated by six companies. 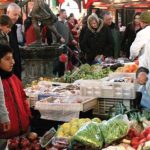