With a prosperous economy and an open market, Chile’s insurance sector expanded powerfully during the last decade. Now as the demand for new insurance products increases, the market is getting more competitive but looks set to keep on growing.

Chile has one of the fastest-growing insurance markets in Latin America. The value of total insurance premiums more than tripled in Chile over the last decade, from $2.7 billion in 2001 to $9 billion in 2010. During most of those years the insurance sector grew faster than the mighty Chilean economy – 18.1% in 2010 compared to GDP growth of 5.2%.

Moreover, Chileans spend a higher percentage of their incomes on insurance than any other Latin American country. In 2010, they spent 4.1% of their GDP on insurance, far above the 3.2% posted in 2001. Similarly, per capita spending on insurance, more than $528 in 2010, was the highest in Latin America.

The strength of Chile’s insurance sector can be attributed to the country’s sound economic situation, the development of a long-term capital market, its pension system, and its openness to foreign participation which started in the early 1980s.

“Chile was the first Latin America country to open its market to foreign insurance,” says Joaquin Echenique, a consultant with PrimAmerica Consultores which specializes in the insurance industry. “Foreign ownership of local insurers was never restricted as it was in most of the neighbor countries. Licensing an insurance company is quite straightforward, although approval from the superintendent is required, as well as $3.6 million in capital.”

Stability is another factor. Due to tight supervision by the Chilean insurance regulator (the Superintendencia de Valores y Seguros or SVS), plus reasonably conservative regulations, Chile has maintained the same number of insurance companies, an average of 54, for more than a decade.

“The supervision at the central level explains why insurance failures are few and far between,” Echenique explains. “The last failure, seven years ago, amounted to less than $70 million, a drop compared to AIG. The failure statistics in the U.S. are far worse.”

Chile’s insurance sector is usually divided into life insurance and general insurance (property and casualty). Life insurance is by far the largest of the two accounting for about two-thirds of the total insurance market, and it’s growing fast. Between 2001 and 2010, life insurance premiums tripled from about $2billion to nearly $6 billion, growing at an average annual rate of 13%.

The dominance of life insurance is due to Chile’s pension system which obligates workers to save in private pension funds. On retirement, the money is usually transferred from the fund to a life insurance company to buy annuities. Although that is changing as can be seen in the decline of annuities premiums, which fell from 65.5% to 38.2% between 2001 and 2010.

“On one hand, there has been a drop of retirement pensions due to changes on early retirement requirements and also due to lower return of pension funds because of the 2008 crisis,” says Sergio Ovalle, CEO of BiceVida, one of Chile’s largest life insurance companies. “On the other hand, we have witnessed an increase in market share for the other life products. This comes from a growing concern for different life insurance products by the population.”

These different products now include individual pension savings schemes similar to the 401k in the U.S.; group life policies as most companies now offer their employees health and life insurance; mortgage and loan insurances which are usually required by financial institutions; and disability and survivorship insurance.

Meanwhile, the non-life insurance sector, despite having a smaller share of the market, has grown faster than life insurance. Non-life sales nearly quadrupled between 2001 and 2010 going from $740 million to more than $3 billion. The sector grew at an average annual rate of 17% compared to 13% for life, now non-life occupies a third of the entire insurance sector whereas ten years ago it had a fourth.

“There are many reasons for the growth of non-life,” says Eduardo A. Couyoumdjian, CEO of General Insurance for Chilena Consolidada, which is 90% owned by the Swiss insurer Zurich.

Events such as the reconstruction after the 2010 earthquake and the subsequent rise in housing prices contributed. Privatization of the construction industry did as well. Most public construction projects such as schools and hospitals are now built by private companies which are required to have insurance to bid on projects. Chile’s developing economy is another factor.

“Chile is getting a mature economy, we are in the OECD, poverty is reduced, the country is expected to reach 7.2 percent GDP this year, and there is a higher mentality for insurance,” says Couyoumdjian.

While the number of insurance products being sold have remained the same, the sales channels have become bigger and more competitive.

“The market has changed aggressively in the last ten years,” Couyoumdjian says. “At least 25% of multiple lines of business now go through large retail department stores like Falabella, Almancen Paris and Ripley, or through insurance banks. So now we are all in bed with them and it’s quite delicate.” 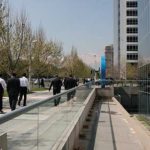 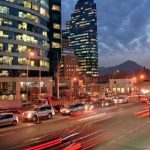