Latin America’s favorable economic outlook is driving the office real estate markets as well as all other commercial facilities. The region’s total office supply has increased an average of 6% a year over the past decade and is expected to grow by another 8% a year over the next two years to satisfy demand.

In Chile, the dynamic growth of the economy is reflected into both industrial and office markets. Brazil and Chile, among the strongest regional economies, report the lowest vacancy rates in Latin America, averaging between 3% to 5% by mid-2011. In Santiago, office vacancy fell to 2.6%.

Despite the tight market, rents have stabilized for Class A buildings in the Chilean capital and are among the lowest in the region. In Rio de Janeiro, for example average asking rents rose almost 8% during the first half of 2011 to more than $81 m2/month. This was driven by strong rental growth in the city’s numerous submarkets.

But in Buenos Aires and Santiago, rental values have remained stable. Currently at just over $27 m2/ month, Santiago office rents are slightly lower than the average at year-end 2010.

The low office vacancy rate in the Chilean capital will begin to ease up next year with the opening of the Costanera Center, the country’s flagship real estate project.

The $600 million project will consist of four skyscrapers. The 70-story main tower is set to enter to the market in April 2013 and will be the tallest in Latin America at more than 300 meters high. It will have a total surface area of 694,000 m2, split between office and retail space. The main tower itself will provide Santiago with 128,000 m2 of new office space.

Spurred on by a strong economy and optimistic growth expectations, Chile’s real estate market is growing rapidly. In addition to the Costanera Center, the new Plaza San Damian and Rosario Norte 100 buildings in the Las Condes submarket of Santiago which opened in 2011 will provide almost 30,000 m2 of Class A office space.

In the industrial market, both demand and supply are increasing, but in balance, with demand slightly outpacing supply. This is so even though new supply has been added at a very high rate.

In Santiago’s industrial sub-sector, there has been an intensifying pickup from 2010. Chile’s real estate sector has for years broadly kept supply and demand for commercial property in balance. Limited development before the current growth surge began in 2010 has produced just enough supply to ensure low vacancy rates.

The absorption in class A+ and A office building in Santago reached 35,543 m2 in the second quarter of 2011, according to a Colliers Research and Forecast Report on Santiago. While this was a slight decrease from the previous quarter, the pace of absorption is in line with an expanding market.

Mining, engineering and energy companies absorbed much of the office space. The areas of Santiago that saw the most absorption were the El Bosque/El Golf and the Nueva Las Condes areas.

The Costanera Center is more than just another skyscraper, according to the building’s developers Cencosud. The mega-project is an example of the concept of “neo-urbanism,” an urban design movement against urban sprawl.

The Costanera Center is designed to make maximum use of the space on which is it built. Costanera Center has built more than 700,000 m2 in an area of 47,000 m2. It will use the latest technologies to reduce energy use and privileges a concentration of residential, commercial and professional activities. This concept limits the number of roads needed, reduces traffic and improves pedestrian spaces.

The tallest of the Center’s four buildings, named the Gran Torre Santiago, was designed by Argentine architect César Pelli, one of the most renowned architects in the world, designer of the Petronas Towers in Malaysia, and the World Financial Center in Hong Kong.

The Gran Torre itself will be 300 meters in height, making it the tallest building in South America and the sixth highest building in the world. Two other buildings will be 170 meters high.

The Costanera Center is being built in the Sanhattan financial district of Santiago between Providencia and Las Condes. Construction was put on hold in January 2009 as a consequence of the recession but resumed later that year. The Center is scheduled to be completed in 2013. 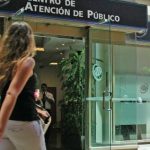 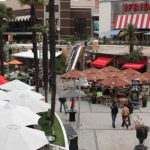